Sponsor Spotlight: Tomas Sundh of AJAT on Getting Real About Climate Change 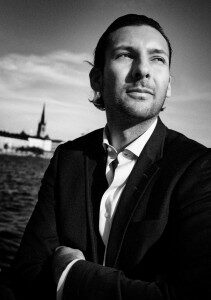 Innovation360 CEO Magnus Penker decided to do something about climate change after prompting by his children and an employee. This challenge resonated with Tomas Sundh, Head of AJAT Sweden, and the ABC Group, which owns Crownstudent.com. These companies represent the primary source for student graduation caps in Scandinavia.

Tomas was inspired to run an on-site ideation in collaboration with the Fix the Planet. We reached out to find out how the campaign impacted the community and connected over a video call.

Tomas and his staff are concerned with the same issues that matter most to his customers: the students and their parents. Students care about the future condition of the planet they will inherit. “Every company, every individual needs to take action on the environment,” Tomas said.

That was among the primary factors that inspired him and his team to run a special program to generate ideas for Fix the Planet. “In Sweden, we are very into the environment. We want to do something about it but too often we don’t know how. Fix the Planet is something HR managers or company leaders should be aware of. It gives people a framework to act on environmental issues, which has had a very positive effect on motivation. It makes it real for people.”

By narrowing down a big problem like fixing the planet into eight strategic initiatives, the platform helped users feel empowered and visualize more concrete solutions.

One of the ideas we discussed was an idea from licensed practitioner Greg Collier encouraging individual companies to adopt rainforest mascots or corporate totems that correspond to specific acreage inside a real rainforest. This way companies can connect their intentions to actions that improve the environment.

Tomas said, “You can point to a location on a map and say, ‘We can prevent destruction of this place.’ That is also how you build trust with your customers and prove that your concern for the environment is truly part of who you are as a business. Customers can see right through it when it’s not real.”

Another idea that grew from this discussion was the idea of replacing the ecotourism model, which has been problematic in some parts of the world, with a corporate sponsorship model, where the people who come to the area are fully invested in protecting it.

Wider discussions like these, sparked by Fix the Planet ideas, drove the success of their program. Tomas found that reaching out to people on social channels raised awareness but couldn’t drive ideation. The group needed to set aside meeting times offline to brainstorm together and support each other’s ideas.

“The point when we got Fix the Planet to work, when we really started seeing ideation,” Tomas said, “was when we dedicated time to it in a workshop. I think generating ideas is too time-consuming to do it on the fly. People need time to think about it. If you aresitting on a bus, looking at Instagram and you’ve got 15 minutes, are you going to start working on an ideation?”

“One learning we took away is that social channels can be useful in influencing people and raise awareness of the campaign rather than driving ideation. I think that if a school could arrange just one hour in one subject for students to create ideas on the platform, both teachers and students would love this. I think it’s a fantastic way of doing it.”

Tomas said that the most effective way of bringing employees on board is to find champions. In his case it was just two or three to start but their enthusiasm spread.

“If I were to do it again, next time I would go to the people who I knew would be engaged with Fix the Planet and bring them to them earlier. I would ask questions like, ‘Can we really do this?’ and encourage them to think of the idea as partly theirs. The key was to create fun and we succeeded. No one wants something forced on them from top management. They want to have fun coming up with ideas.”

In the end, employees ended up challenging other companies to take on a campaign and enter their ideas on climate. Imagine a world where companies competed to solve problems related to climate change and to bring in all of their stakeholders from customer to employees.

Tomas was hopeful that there would be more Fix the Planet campaigns in the future. “If you do it another year, we definitely want to be involved,” he said.