Conserving the Planet’s Biodiversity: Dr. Kerry Kriger’s Mission to Save the Frogs 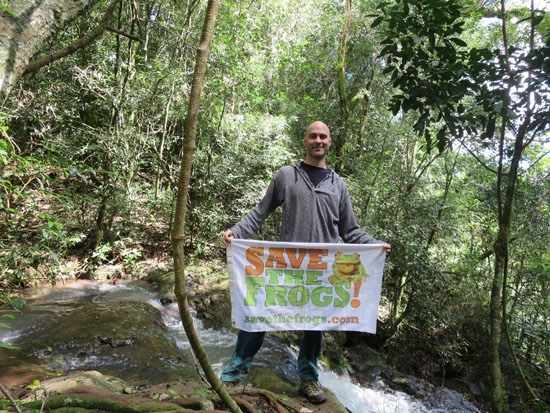 What is the most endangered group of animals on the planet? Chances are you would never guess amphibians, but they are more endangered than mammals, reptiles, birds or fish. Nearly one third of the world’s amphibian species are facing extinction. Up to 200 species of frogs have completely disappeared since 1980, which is unprecedented. Historically, amphibian species go extinct at a rate of about one species every five centuries.

Dr. Kerry Kriger is someone who is doing more than tracking statistics. He has devoting his life to keeping amphibian species alive and restoring their habitats. His organization Save the Frogs was founded in 2008 when he discovered that there were no major national organizations addressing this critical issue. Over the past decade or so, his global network of staff, volunteers and donors have coordinated and conducted more than 1,800 educational events in 62 countries, designed to inspire action and grow the ranks of conservation enthusiasts.

While the photogenic frog is the best known amphibian, the scientific classification includes toads, salamanders, newts and the caecilians, a legless amphibian that only lives in the tropics. Dr. Kriger’s mission has been to raise awareness around the loss of amphibians, implement new legislation, create and restore wildlife habitats, empower the next generation of amphibian conservationists and introduce millions of people to the wild world of frogs and their close relatives.

Amphibians generally and frogs specifically act as linchpin species in many different ecosystems, similar to the critical role that bees play in the lifecycles of plant life. Declines in amphibians have resulted in blooms of algae, which endanger many other species and can collapse delicate ecosystems. The many species that eat amphibians will be devasted by their loss as well. Another way amphibians protect our way of life is by controlling vector-born diseases and pests that threaten human food supplies. The loss of amphibians is damaging our scientific efforts to learn their unique abilities, especially the medical research on how some amphibians are able to regrow limbs.

The Save the Frogs organization both protects amphibian populations and empowers ordinary citizens to make extraordinary contributions to the betterment of the planet.

This spring, Dr. Kriger and the Save the Frogs organization have agreed to sponsor the Amphibians in Danger ideation at Fix the Planet. He and his team have already brought new information and targeted questions for the campaign and will offer advice on turning the submitted ideas into testable hypotheses, ready for experimentation.

See the latest ideas related to Amphibians in Danger, leave comments and share your own ideas at https://fix-the-planet.com/biodiversity-ideas/amphibians-in-danger/